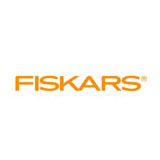 1967 - Fiskars manufactures the world's first plastic-handled scissors
The orange-handled scissors are one of Fiskars' best known products. But how was decided to make the handles of the scissors orange? In 1967 when the first basic models were about to be manufactured the designer wanted the scissors to be black, red or green. As the prototype went into production, the machinist decided to finish off the orange color he had in his machine. This meant prototypes were made in four different colors, of which the orange and black were most popular. A choice had to be made. An internal vote was taken at Fiskars, and the result gave birth to Fiskars orange-handled scissors.